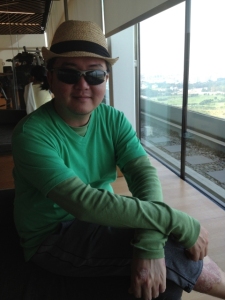 Recently via Facebook, we were in contact with Ray Chua who lives in Singapore.  Ray had written a song about Psoriasis. We knew we had to find out more about what inspired Ray to compose such a song. This was also the opportunity to ask Ray a few questions about his psoriasis. The YouTube videos are located at the bottom of this post.

1. When you first discovered you had Psoriasis, how did you feel?

Ray: I didn’t feel so good I guess, especially when I found out that I had to deal with it for a lifetime. I was also a little scared cause there was so little information about it. Back then, the Internet was not filled with info about the disease as there is now. I was diagnosed with Psoriasis 13 years ago.

2. What are the challenges you face while having psoriasis?

Ray: Here are a couple of challenges:

a)      How people view my psoriasis when they look at my nails, face, hands and legs. Psoriasis brings upon self esteem issues.

b)      No spas and massages for me because every one of them will freak out when they see my body.

c)      No swimming because the ignorant lifeguards (not enough awareness created) would come to me and ask me to leave the swimming pool. They are worried because in their mind, I have a contagious skin disease and will cause the public (other people in the pool such as kids and mothers) to vacate the pool. At first I thought it was a good idea after all – I could have the pool all to myself! Later on, I realized I would become the talk of the pool so I decided not to go back there. I am wondering if Malaysian beaches are cleaner? The beaches in Singapore are not very appealing so I stay off the sea as well (Editor’s note: Yes Ray, Malaysia has very clean beaches if you know where to look. We would advise not to swim in Malaysian waters during jelly fish season as this could severely affect your psoriasis if stung).

d)      I always have to moisturize & to keep my skin from being dry (as it would cause pain).

e)      Scratching and flaking constantly. I dislike being a public and home nuisance as people have to clean up after me.

3. What is your source of strength and inspiration in order to overcome or manage your psoriasis?

Ray: As I’m a Christian, it is Jesus. I know that whatever I’m going through, it cannot be compared to the pain and torture Jesus went through to ensure my place in heaven. This is our Christian belief. Claiming His promises from the bible helped too.

4. How did the idea of writing a song about Psoriasis come along? Was it difficult to compose the lyrics and music?

Ray: I figured it was not others fault if they don’t know what Psoriasis is. So I decided to do my part in raising awareness after I read an article on Channel News Asia about a 13 year old Malay girl who was being discriminated by her classmates in school. I cannot imagine how she would be feeling apart from feeling really sad. Since I had some time on my hands now, I decided to write a song about it.

It was not difficult because I was totally inspired to write a song about psoriasis. When the inspiration came, I just let the feelings flow and out came the music. The lyrics were pretty much what I felt – so it was easy. There is an English and Chinese version.

The Chinese version and the filming of the music video were done by my girlfriend (with no prior experience with filming). Getting this done altogether was something we could do together as it was for a good cause.

5. Do you have any encouraging words about fighting psoriasis that you would like to share with others?

Ray: Be confident about ourselves. No matter how we look – we are a creation beautifully crafted by God. Any imperfections are only trials on Earth to mould us to be stronger and better people.
In the meantime, try to “de stress” and watch our diets (if this affects your psoriasis) so that we can get into remission while waiting for a cure. Don’t worry, be happy! Come and like my psoriasis page where I will be posting more Psoriasis tips and discover some of my music at http://www.facebook.com/raychua.pso

God bless you all & do support Psoriasis awareness.

Editor: Ray, we wish you all the best and thanks so much for sharing your story & music with us.

English Version: The Psoriasis Song (Original) (Don’t Look At Me That Way) by Ray Chua

Join the Psoriasis Association & be a member. Your membership fee helps the association to continue operating. Click "Member Registration" at the top of the page (for desktop browsers) or 3 line menu icon (for mobile browsers).

Visit psoriasismalaysia.editboard.com to visit and contribute to the discussion forum